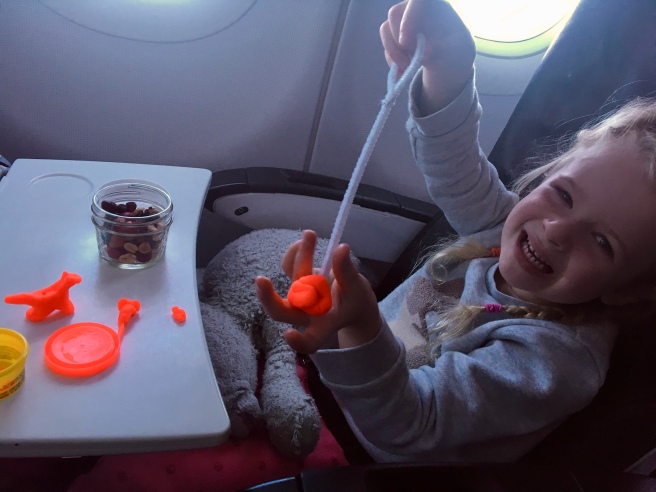 Recently our family flew to Washington (post here about our trip). Flying with a child brings a whole new element to what can already be an exhausting feat. However Marilyn is an excellent traveler, she handles the chaos of getting to the airport, the airport and all its obstacles, the flight, exiting the airport, getting a car, etc. beautifully and she always has. Her first flight was at 4 months and she didn’t shed a tear even though it was 5+ hours, both ways. She has taken a total of 5 trips in her 3 1/2 years of life and not one of them would I complain about. I like to think that a lot of her traveling ease is because Robert and I come prepared, PREPARED. Our recipe is snacks, entertainment, not the digital kind, and punctuality. That last one my husband takes to a whole different level. Being green was an interesting factor in our latest flight. Most of the snacks I would usually reach for are things that she loves but never has, like bunny crackers, animal crackers, fruit snacks…all items in a plastic bag. This time around I had to get creative and this is how we did it.

We got to the airport really early. At least two hours early, maybe even more, Robert actually prefers something closer to three, which I think is flat out crazy! This time we flew just after lunch so we were able to sit down and have lunch. We flew Virgin America and since they built their terminal at SFO they have some actually yummy options unlike the fast food chains you find in other terminals. They even have a bulk shop in the terminal, mostly candy but there are a few other items in there too. When we were finished we filled up our water bottles at one of the many fill stations and grabbed a seat to watch the airplanes. This is Marilyn’s favorite part. She loves to watch them take off and land and even is fascinated by all the people guiding the planes. Right before we board we hit the restroom – my only complaint about VA is the loud restrooms and those darn automatic toilets. I get that they need to get people in and out quickly and a lot of people use those, but do they have to be so loud? Do they have to flush on your toddler while she is taking her time to empty her bladder? Then there is the ever loud hand dryers. Great no hand towels, but do they have to be so loud? They horrify her and taking her potty in their restrooms is a struggle. It would be nice if they offered a family restroom or two, just saying. After that debacle we get on the plane.

This time Marilyn was big enough to carry a back pack, which she was very excited about. She felt like that was “her” luggage and I filled it with some light items that she could not have until she got on the plane. That is actually the rule with all of our items, you cannot open anything until we get on the plane. There is plenty to do and see in the airport that there is no need for it before take off.

In her backpack – two paperback books, an empty reusable water bottle, a pair of socks (incase she wants to take off her shoes during the flight), 4 oz ball jar filled with trail mix, and her precious bear.

Make sure that any water bottle you bring in is empty! My mom made this mistake and Robert had to dump it out then go back to the beginning of the security line and start over. It took so much time!! I was seriously afraid that they were going to make me dump out all of our bulk food in jars but they did not. We had quite a few. In my carry on I had her jacket since it was going to be freezing where we landed and I have horrible flash backs to a 12 hour flight I was on with the AC stuck on 54 degrees, it was freezing and I didn’t even bring a sweater on the plane with me, big mistake. I also had a couple more books, even one for me, refills on snacks just in case, and a lunch box full of goodies. This lunch box has been on almost every flight with Marilyn. I usually fill it with new toys that she hasn’t seen before and this is where the snacks that she never gets usually reside. As soon as we are taking off she starts in on the lunch box to find a favorite snack to devour while we change elevations.

In her flight box – a book, small container of play dough from last halloween, bundle of crayons, recycled papers paperclipped together for coloring, pipe cleaners, small container of bulk sesame sticks, pistachios, jelly beans, and chocolate raisins, a small toy car,  and stickers that were part of my grandmas recipe box.

I dug around the house to find things that would interest her and keep her entertained. She put stickers on all of us, colored and practiced writing her numbers, made playdough figures and stuck the pipe cleaners in them, ate almost all of her snacks, read all the books, and drove the little car over her tray over and over. The flight was 1 hour 20 min so if it had been longer I would have packed more. We all refused a beverage when he cart came around except Marilyn who got a small cup of juice. The cup was plastic, but it was the biodegradable kind and the juice was real juice so I let her have her treat. I recall it being very exciting when the cart came when I was a kid and didn’t want to be the grinch. Had it not been biodegradable I might have passed, I guess we could have used an empty jar.

Flying in itself is not a green way to travel, solar flights are coming but for now they are definitely contributing to the build up of fossil fuels. We couldn’t walk, the train was three times the price of the flight, driving would have taken us 14hrs, and I really don’t feel like its fair to tell my sister that I can’t come visit her and her new baby. So instead we made a contribution on board for our flight to offset our carbon. Virgin America offers this service in flight. Sure I could have done this on my own, but I like that it sends a message to the airline that I care about this sort of thing. I feel like they should be the ones paying the tax but in hindsight if they did have to pay it, it would most certainly be passed on to me anyways as they are a business. I believe the carbon tax will motivate business to change their dirty ways, but that is another post.

Last little note, I hide a few items in my checked luggage for the return flight, toys snacks etc. I didn’t plan well enough with the snacks the flight home, as I actually drove right by the bulk store when I intended to stock up for our route home, so we ended up buying a bag of pretzels in the airport. Overall I think we did a great job of being mindful while flying this time around and it really wasn’t hard. Safe travels!

Join us as our families embark on a journey to reduce our fossil fuel consumption, teach our children to live with a lighter footprint, and secure a healthy planet for their future. We can create change now, in our own homes, and you can too!